The Impacts of Road Salts on Trees 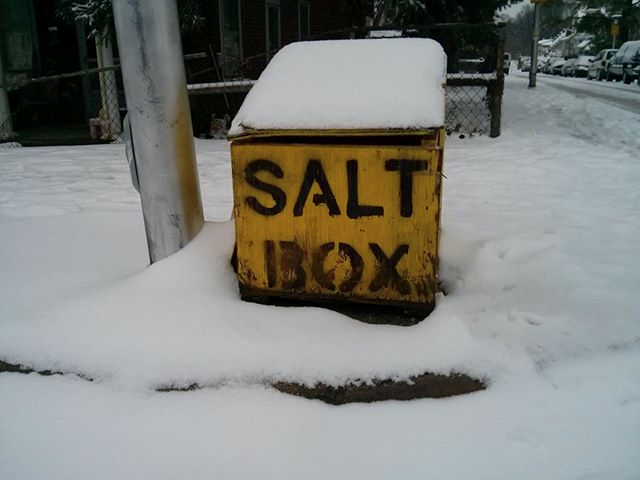 Winter is here, which means cold temperatures, icy conditions, and snow.  With winter’s frozen precipitation comes human’s solution, which unfortunately more often than not is salt. More than 20 million tons of sodium chloride are used on our roadways every winter (13 times more than the whole food processing industry annually).

Salt lowers the freezing temperature of water.  A 10-percent salt solution freezes at 20 degrees F, rather than the normal 32 degrees F. The reason many municipalities/homeowners use salt is because it is the cheapest way to deal with icy conditions.

Now you may not have thought twice, about the white lines on the roadways throughout the City 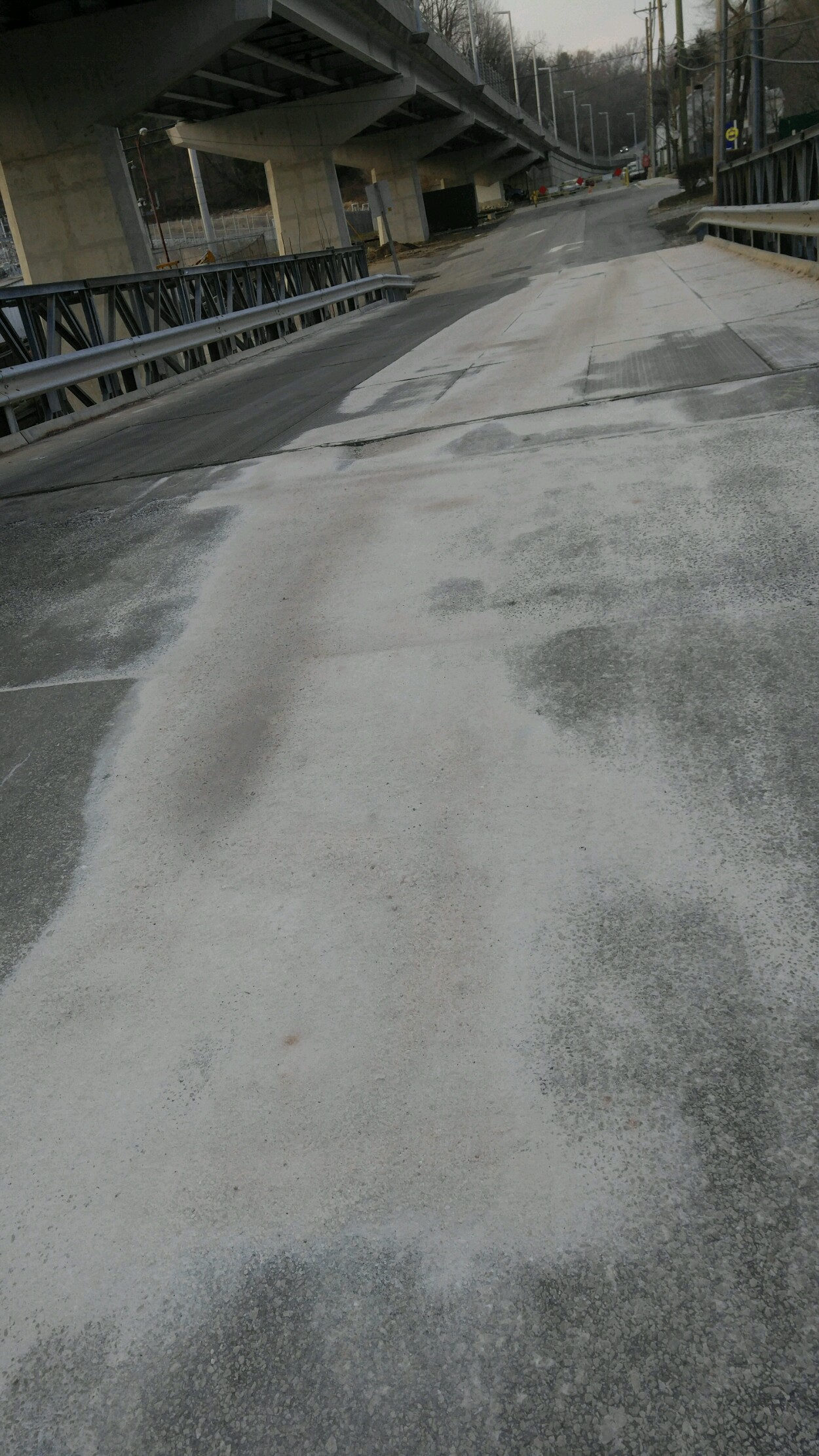 late last week, but this salt spray (along with the rock salt spread closer to precipitation events) can be detrimental to our local waterways and surrounding environment.  The problem is not with the melting of the ice, but rather the fact that 70% of the salt stays in our local watershed and can damage trees and vegetation up to 650 feet away from roadsides.

Salts damage plants in two ways: salt in the soil 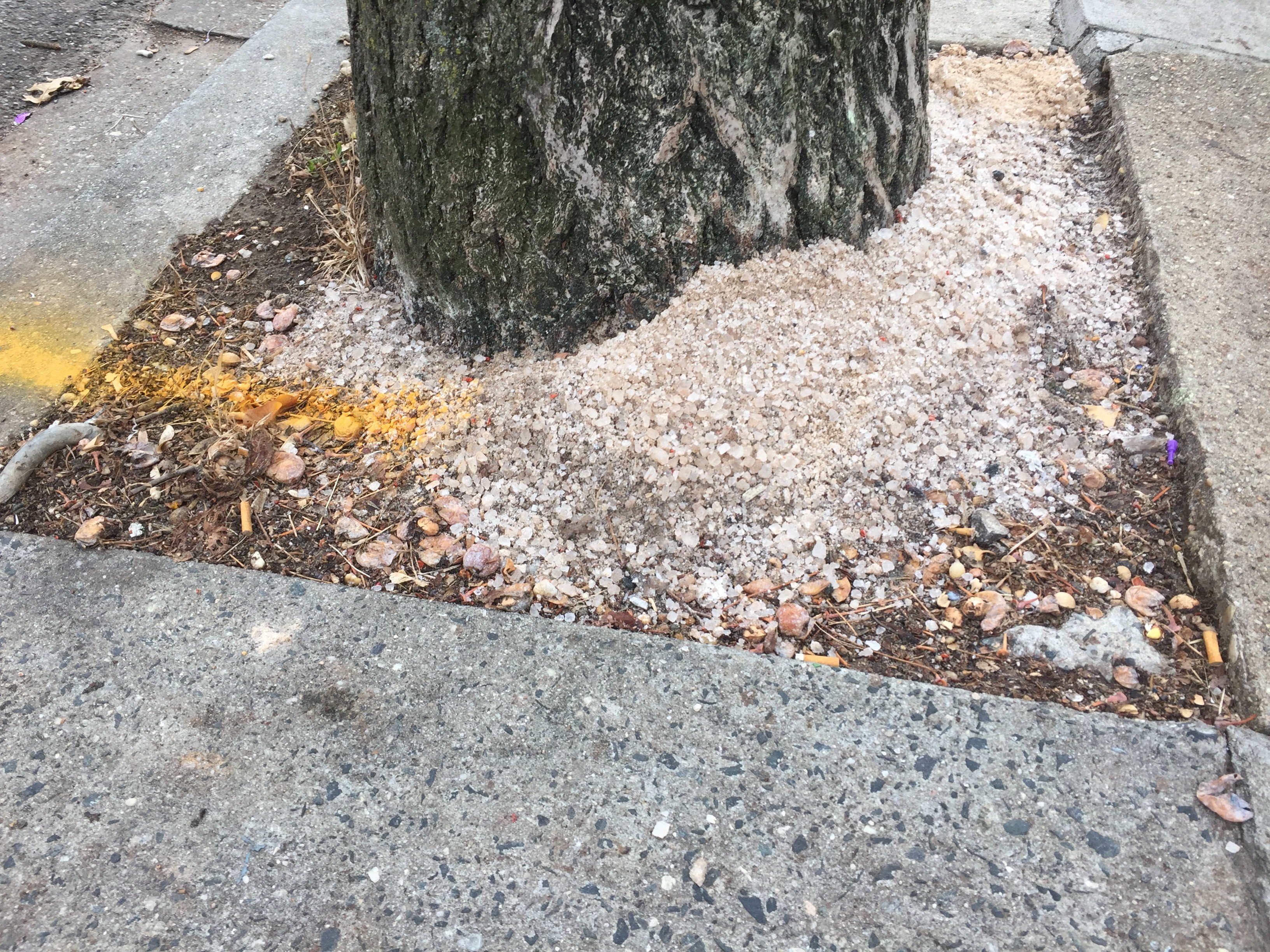 and salt in the air, each of which has different effects on trees. Salt, in soil, eventually breaks down into sodium and chloride ions. Chloride ions can be absorbed by the roots in the early spring and prevent the bud opening. The sodium ions can halt the transport of essential nutrients through the tree.  This prevents magnesium and potassium from being absorbed, which limits the tree’s ability to make chlorophyll. Roots find it harder to uptake water as the salt levels increase. At elevated salt levels, water within the root can actually be drawn out of the plant.  This damage isn’t clear until “leaf out” in spring because trees are mostly dormant during winter months.

Salt used on roads is also stirred up into the air, 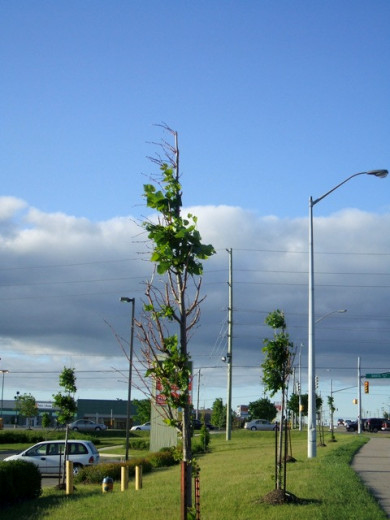 where it coats buds and twigs.  Similar to the roots, the salt draws moisture from the buds and eventually new leaves. A tree can die of thirst if it is exposed to enough salt.

Salt also damages transportation infrastructure (both concrete and metal) and automobiles, up to $7 billion dollars annually in the US.  It can also turn roadsides into a sort of artificial salt lick that would be attractive to animals like deer and native birds. As a result, they run a higher risk of becoming road kill. In high concentrations salt can become a toxin to many aquatic organisms and amphibians.  On an individual level, salt on walkways can damage your lawn and garden, as well as cause cracking in your pet’s paws.

So what are the options?  There are a multitude of other deicers such as:  organic salt-free deicer, pickle brine,urea (not good for gardens), alfalfa meal (natural fertilizer), sugar beet juice, sand, ash from the fireplace and/or coffee grinds.  But each of these options has pro’s and con’s, both economically and environmentally.  Reducing the amount of salt used in winter and flushing the walks and soil with fresh water in the early spring will reduce the impact to our trees and environment. Eventually the chemicals will work their way through the soil and surface water systems increasing the salt levels of the ground water.

The TreeBaltimore Fall Tree Giveaway store is opening TODAY 10/7 at NOON! Link in bio.These trees are FREE and are for city residents to plant in their... Read More

We would like to thank Mayor Young for signing the law approved by the Baltimore City Council which strengthens the Forest & Tree Conservation regulations.... Read More

No Pro Baseball, but orioles nesting in the park

While former Baltimore Orioles baseball player Adam Jones swings his bat for the Buffaloes in Japan, our own Oriole Park at Camden Yards is closed... Read More